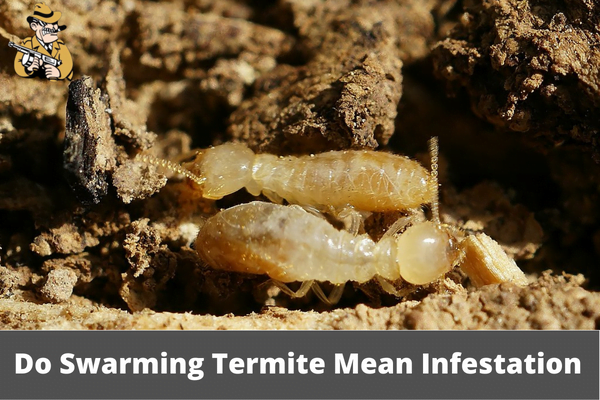 Swarming termites, also known as alates, are winged termites that leave their colonies for two reasons: reproduction and colony establishment. Alates resemble flying ants and will colonize anywhere with a source of cellulose and sufficient moisture, making your home an ideal location for a new colony. Although alates do not bite, sting, or consume wood, their presence indicates a nearby termite colony.

When Do Termites Swarm?

The timing of termite swarms is dependent on the termite species involved. Subterranean termites typically swarm during daylight hours in the spring. In late summer and early fall, dry wood termites swarm, while damp wood termites swarm in the summer. Once conditions are favorable, termites will swarm, typically the day after a rain shower with overcast weather and winds less than six mph. Wet soil after a rainstorm also aids in nest construction.

Why Do Termites Colonize?

Termite swarms occur when the original termite colony has reached its carrying capacity and is prepared to expand. Usually, they occur once yearly, although some species may swarm more than once. Swarms may consist of hundreds to thousands of alates whose sole purpose is reproduction and colony expansion. Once environmental conditions are favorable, the swarmers will take to the air and mate. After finding a mate, they will shed their wings, mate, and find a new nesting site.

If termites have already established a colony inside your home, they may swarm inside. These alates will attempt to enter your home through foundation and wall cracks and crevices. In addition to being attracted to light, alates are frequently found near windows and light fixtures.

What Sorts Of Termite Swarms Exist?

Termite swarms vary according to the species. Drywood termite swarms are typically smaller than other termites, containing fewer than 100 termites. They will swarm in the late summer and autumn months. As a result of the small size of the swarm, it is possible that you will notice the signs of dry wood termites once they have already established themselves.

Moisture-loving termites swarm during the summer months. They are less of a concern to homeowners because homes typically lack the necessary moisture content for survival. However, they can be discovered in wood structures surrounding homes, such as utility poles. Subterranean termites are the most prevalent and have swarms that can number in the thousands. These termites swarm between March and June during the spring.

Although swarms do not necessarily indicate a termite infestation in your home, they are a strong indicator of a thriving colony nearby. Consider a termite inspection if you observe swarming termites in or around your home to assist in identifying termite signs you may have missed and to ensure that a hidden colony is not consuming your home from the inside out.

Swarms of termites can be a common occurrence in your home and cause extensive damage. When you see the signs of swarming termites, contact a pest control company to identify the location and size of the colony. At AAA Assassin Enterprises Pest Control, we are experts in termite identification and treatment. We provide a number of services, including our comprehensive inspection and treatment programs, which can help you avoid costly damage caused by termites. Contact us today to schedule an appointment!

What Our Clients Are Saying

EXCELLENT Based on 126 reviews

Dina Arabiat
One of the best companies out there! Rick is very professional and experienced. They provide great services. I highly recommend using them.

Linda Saunders
I Love this Company. Rick, the owner is the best and he knows his business. I have used him for many of my personal and rental properties and when he does the roach or rodent issues, he takes care of the problem and I see nothing. And if I do have an issue, he stands by his warranty. Highly recommend this Company.

Jane Galvin
Excellent service!! I called on a Sunday morning. I received a call back from Rick immediately. I had a dead (pigeon)? by my front door. He was extremely kind by responding to my call so quickly. He came out within the hour and removed the bird!! Amazing service which I highly recommend! Professional. affordable and responsive. I truly appreciate your service. Especially being a weekend and a rainy day!! Thank you so much!!
Please Leave Us a Google Review
View Our Google Reviews